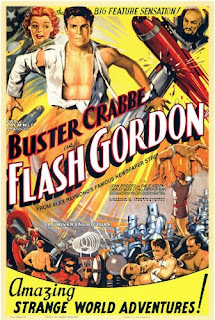 Two years after the debut of the comic strip, Flash Gordon burst onto the silver screen as a serial starring Larry "Buster" Crabbe, Charles Middleton, Frank Shannon, and Jean Rogers. As an adaptation it took certain liberties owing to the usual constraints, but it was largely faithful to the source. The PBS show Matinee at the Bijou probably introduced me to the serials, and even though I had seen Star Wars several years earlier, I was nonetheless enraptured by the 1936 spectacle of Flash Gordon's adventures on Mongo.

Today's viewers may find humor where none was intended, and this can be part of the fun of watching it now, but there is much to glean in the serials for those who are running or playing The Savage World of Flash Gordon in terms of pacing, role-playing, and capturing the atmosphere of the setting.

I recently started watching the first serial again, and I can state honestly that I notice more and enjoy it more upon every viewing. I own it on DVD, of course, but I believe it is also available on certain streaming channels. I have also been listening to the Space Soldiers Podcast, which provides a commentary on each episode of the various Flash Gordon serials. These can be played synchronously in MST3K or RiffTrax fashion, but I prefer to listen to them separately.

Flash Gordon the serial from 1936 is still an excellent source of inspiration for one's Savage Worlds games.

N.B. The first Flash Gordon serial is also known as Flash Gordon: Space Soldiers, a later re-titling meant to prevent it from being confused with the 1950s Flash Gordon television show. 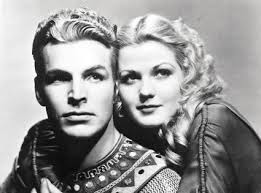 Listing the Beasts of Mongo and Beyond

Almost immediately upon reading the earliest Flash Gordon comic strips, I started writing down the names of the various beasts of Mongo en...